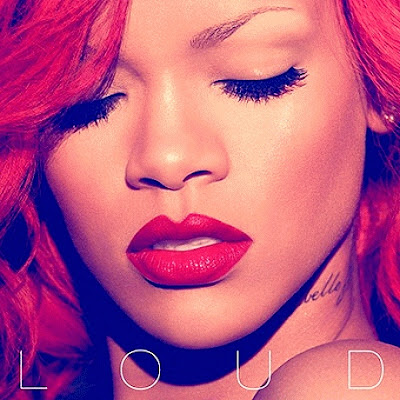 Today Rihanna releases her 5th studio album 'Loud' and Thanks to the internet  I've had the pleasure of hearing the album in its entirety in advance.  I must say that I wasn't sure how I would feel about the album since it took the lead single 'Only Girl' some time to grow on me.
Personally I have a love/hate relationship with Rihanna one moment I'm praising her for being sassy and bold and then the next I'm wishing she would simply disappear (POOF).

That isn't the case with this album.  The production on the album is quite remarkable, and I'm more than impressed with the improvement of her vocal ability on songs like 'Complicated' and 'California King Bed', which happens to be my favorite songs on the album.
There are some songs on the album that although fit into the theme of the albums title just don't quite tickle my fancy.  The rumored third single 'S&M' will never grow on me(NEVER), the intro of the song is quite long and repetitive which eventually forces me to push the next button .  Another song titled 'Cheers I'll Drink To That' which samples Avril Lavigne's 'I'm With You' is one of Rihanna's weakest vocals to date and with that there is nothing more to be said.
The disappointment ends there.  Majority of the album is quite enjoyable and although it may not be a timeless record you can't deny that Rihanna rides the waves wonderfully within her own vocal capability.   One thing is for certain Rhianna remains one of radio's most played artist and with songs on her album like ' What's My Name, Raining Men, and California King Bed, her stay at number one will surely be extended.  The Rihanna reign just wont let up and she has a group of top notch producers and engineers to thank for that.
The Jadon Files Rating: 3/5 Stars
Posted by Jadon Lontae at 6:51 AM

lol this album was amazing! S&M and Cheers are like the highlights of the album to me! great intro songs! but its still a solid album!

S&M is a good pop song but not great. I don't think its third single potential but I could be wrong.. I can almost guarantee California King Bed will be a hit..

The album took some time to grow on me (still kind of is), but I agree with a 3/5. I like S&M. Cheers...is listenable, but I have no problem skipping it. I really like Fading, Man Down, Complicated, and California King Bed has recently grown on me. The verdict is still out on Raining Men and Skin. Good review.

Wow I almost forgot about skin great catch.. That song for me is up there with Complicated, and California King.. Thanks.. I will be doing some interesting videos soon.. Keep coming back