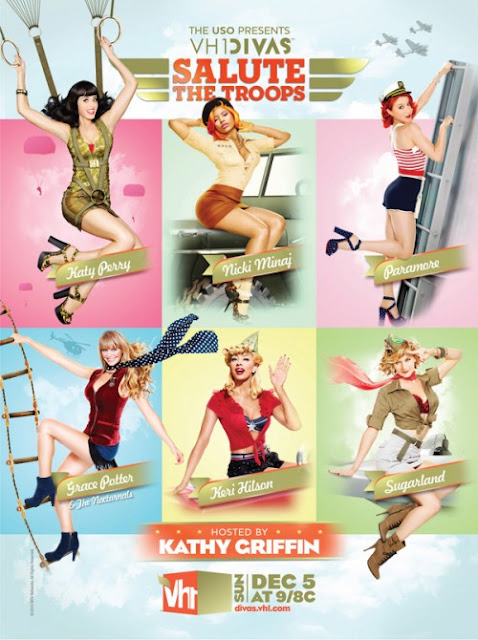 Last night VH1 and its so called Divas saluted the troops.  The performance videos have surfaced but I refuse to post them on this site.  In my opinion Vh1 should be ashamed of themselves for a few of these "Diva's."
Katy Perry, Surgarland, Keri Hilson, Paramore, and  Nicki Minaj
were all appointed Diva status for the night.
I have several different issues with how the show went down.

Where were all the real diva's at? I understand Sugerland & Katy Perry but Keri Hilson is NO DIVA
Why was Keri Hilson even invited to the show?  She was allowed one solo performance and had the least amount of stage time. Talk about a slap in the face...
Why does Nicki Minaj insist on singing 'Right Thru Me' on every televised show. Hello earth to Nicki you just released an album dip into that catalog.

Vh1 should never ever use the word Diva loosely again. EVER. Especially when previously they've showcased greats like Whitney Houston, Mariah Carey, Celine Dion, etc...
Posted by Jadon Lontae at 11:53 AM

LMAO! I'm weak. Keri Hilson just needs to go somewhere and sit down. I used to just consider her a mediocre nobody who could at least turn out a radio hit or two but now she actually gets on my nerves. What a sorry selection of "divas." Poor troops...

Nicki, Nicki, Nicki...she probably doesn't perform anything else but "Right Thru Me" because her album was lackluster as hell. However, people are getting tired of that song so let's share some fresher ish.

I didn't watch, but it sounds like it was a disappointing entry for "Salute the Troops."

I watched it was boring a.f like seriously ...... I cant believe they would insult the word diva in such a way.. Rude!