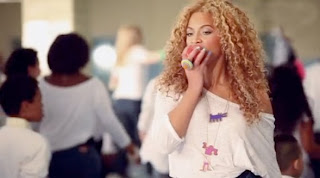 Amidst the online frenzy surrounding Beyonce's new single, the final version now titled 'Run The World (Girl)' has finally made its way to iTunes and Amazon. This song, which most notably samples the popular Major Lazer's 'Pon de floor', finds Beyonce belting her way through the Shea Taylor and Switch beat that features lyrics from The Dream. So has our thirst for a new innovated single from the powerhouse been quenched?
What I can say is that this song will definitely be a grower if you find yourself at a crossroad or a pivotal point of indifference. Beyonce has delivered yet another female anthem for 2011. Boasting about her abilities as a woman to rule, conquer and demand presence, Beyonce effortlessly runs circles around her other contemporaries with her soaring vocals. Her delivery on this track is alarming and reminiscent of 'Ring The Alarm' being very loud and direct. One thing for sure is that she isn't playing this round. On this track we find Beyonce returning to her urban roots and growling her way through this bass driven song. No one can ride a beat like Queen Bee! The production of the song is the standout, however the track itself tends to get too busy and redundant at times. The track also falls short of lyrical content, but then again who really cares about the words when you're going in on the dance floor? As expected this song will definitely be the club banger everyone has been waiting for!
But I digress, using a more analytical approach, 'Run The World' sounds like a mix of all of Beyonce's club hits cemented into one that has failed to impress. Will this be a winner for the singer? Unfortunately only time will tell. This song definitely will be a shock factor for radio since this song sounds like nothing that is out right now. Hopefully the WORLD will be ready for the return of B. It's safe to say that the song is very underwhelming for an artist of Beyonce's caliber; lacking originality and lyrical content. But it's a club banger and lets hope the video has the 'Single Ladies' effect!
John's opinion: Love the song, not groundbreaking.
Posted by Johnerz at 10:28 PM

Everybody go to Youtube. Theres a remix of this single produced by this guy name Fyuchur. Its Hot!!! Even her fans love it