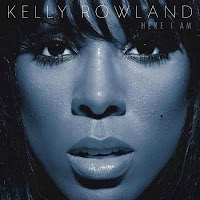 Kelly Rowland has a lot to smile about lately.  The singer is finally enjoying success in her own lane, stepping into the spotlight and making a respectable name for herself amongst a group of industry heavyweights.
Rowland's third solo album 'Here I Am' finally received a release date after she managed to land a #1 single with the title track Motivation after many failed attempts with songs like (Rose Colored Glasses, Commander, & Grown Woman.)  Just a few months later Kelly is ready to deliver with new found motivation & the want to secure her rightful spot.
Standout Tracks
'Motivation'-  The title track from the album landed Kelly her first #1 single w/o being a featured artist.  The song is not what we are typically use to hearing from Rowland due to its overly sexual lyrical content.  However it became a fan/non fan favorite and is now the signature sound behind the entire record.

'Lay It On Me'-  The follow up single that leaked prematurely a few weeks ago is also a sexually charged number.  Although the song isn't as strong as its predecessor I can see why it got the nod for 2nd single.  The chorus is somewhat catchy but the beat is infectious and has a killer summer vibe.

However listening to this song reminds of 'Right Here' by Nicole Scherzinger the vocals are darn near the same.  Kelly has some explaining to do!!!


'All Of The Night ' ft. Rico Love-  A sexy duet on the album where Kelly takes you back to the bedroom.   The song is so smooth and I love how Kelly compares her sex to music "Turn the music on, & I'll be your favorite song" she says as she pleads.  Very sensual.

'Turn It Up'-  A song that can easily be single material.  Has a club/party vibe but after more evaluation you realize its much deeper.  Kelly is scorned by her ex but instead of airing him out she decides to turn it up, and pop bottles until she is fully released of him.  I enjoy how they played with the concept of the song.

'Feeling Me Right Now'-  If your going to be Cocky this is how your suppose to do it.  Kelly talks about self-love and being aware of your own worth.  I especially love the part where she says "I want to take her home cause' I know I'll love her right".  I raise my glass to that ain't nothing wrong with loving yourself without bringing others down in the process..

'I'm Dat Chick'-  An failed attempt to make a female empowerment record.  Taking notes from Keri Hilson's 'I'm so Pretty Handbook',  Kelly pretty much jacked the same theme behind 'Pretty Girl Rock' but didn't execute it nearly as well.  I'm not sure what is with these female singers of lately but they sure like to put themselves on a pedestal.  Don't talk about it be about it!!

'Down For Whatever'-  A great song if your into the Euro-Pop sound that is huge right now.   I actually don't mind the song but frankly it doesn't fit into the vibe of this album.  I'm aware however that Kelly has made quite the name for herself across the pond so it would have been career suicide to alienate any of her fan base at this point.

Other Standout Tracks
( Keep It Between Us, Work It Man ft. Lil Playy)

Kelly has managed to piece together a solid effort.  I won't complain because I know how much she fought for this record and for that I admire her strength.  I think she had to many collaborations on the album and she could have done without them , but to each their own..

We both gave her a 3.5! Nice review. Mine went live today as well.


I will say 'I'm Dat Chick' is better than 'Pretty Girl Rock' tho.

I don't like either song to tell the truth. Everybody knows how I feel about Keri Hilson I tried to go into the song without being biased but she makes it so hard for me. I can say that Pretty Girl Rock is a lot more catchier tho...