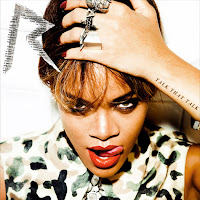 Its only been six years since Rihanna hit the scene, and the Pop-Princess has managed to secure herself a spot amongst industry greats as a main contender.


With eleven #1 singles Rihanna has become one of musics premiere acts and shows no signs of slowing down as she is set to release her sixth studio album 'Talk That Talk'.
Successfully revamping her  image, and sound creating a new persona for each record.  Rihanna has proved  naysayers , and critics alike wrong and has every reason to feel like she is the only girl in the world!!  The new journey starts here and the Rihanna navy is up for the ride.

'We Found Love' -  The first single from the album landed Rihanna her eleventh #1 .  The song which mainly consisted of instrument was more of a Euro- House sound than any of her previous pop hits.  The record showcased Rihanna in a different light , no hardcore middle just a soft dance like record with rave-happy breakdowns.

'You Da One' -  The second single is RiRi as we know her.  The mid-tempo song produced by Dr. Luke cleverly rides the balance of R&B & Pop.  The chorus on this song is so infectious and the choppy vocals give it that special something.  This song will be one of those records that will stand the test of time.

'Talk That Talk' ft Jay -Z -  Rihanna and her mentor rekindle their chemistry on this Stargate produced track.  Jay delivers an rhyme so impressive that riri almost seems like a feature on her own song when her verse finally arrives.  However doing what she does well as a talented hook artist she manages to save face and give Talk That Talk a deserving  piece of her island girl swag..

'Cockiness' ( Love It) -  This is one bad ass sexually influenced song. “I love it, I love it , I love it when you eat it" she sings.  However the most captivating part of this song is when the pop-princess does an unorthodox flow combined with her Caribbean accent taking the song from hit to mega-smash!! Most def my fav from the record....

'We All Need Love' -  Rihanna opens up on this record about sometimes feeling a bit lonely and her longing for that special someone.  "I can pretend that I'm not lonely, but I'll be constantly fooling myself" she sings. She may not be the best singer but she knows how put emotion into a record that makes you feel as if your listening to perfection.

'Drunk On Love' - Though the  song is great it rides a little too close along the lines of 'We Found Love'  which can be seen as good or bad.  I believe that this song has potential to rock the UK fanbase if Rihanna decided to push it on that front.  It would have been interesting to see her package the two songs together as a video package they seem to tell a similar story.

'Birthday Cake' -  I love this record it only made the So So Moments list because of how short it is.  How dare she only give us just over a minute of this hotness..

Other Standout Tracks
( Roc Me Out, Watch N' Learn, Farewell)

This may very well be Rihanna's best album ever.  Not only has she grown vocally, she and her team have managed to piece together an album that combines all the elements of Rihanna as an artist.  I can't complain on her putting out an album every year when she is consistently out doing herself and supplying music that is true to who she is.